9am on a weekend morning.  Early enough to be slightly conscious. Too early to be upright.

A poke in the ribs.

"Will you make waffles for breakfast?" 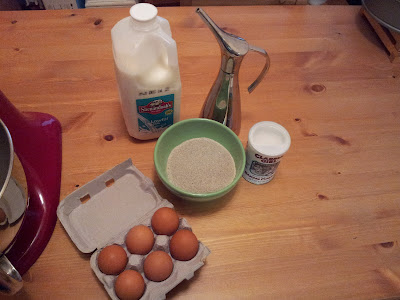 The observant among you will note that this is very similar to the pancake batter described in a previous post.  It's not an accident - Waffles are basically just squared-off, crispier, toastier pancakes with dents in them for holding syrup.

Regarding the flours, feel free to experiment with different combinations.  I have had success with varying proportions of buckwheat, millet, rice and teff flours so far.  I'm not sure that I would recommend using only one flour, unless you're a really big fan of that flour's particular idiosyncracies.  I, for instance, am a big fan of buckwheat and can happily chow down on a 100% buckwheat waffle.  Others, however, may not share that sentiment.  Based upon feedback from Liz, I think that my best results for gluten free waffles have always come from batches that used at least two different flours.

Here's the drill, very similar to the pancake routine:

Step 1: Get Crackin'
Separate your eggs, and start pre-heating your waffle iron.  Liz and I have a sweet All-Clad Waffle Iron that we got as a wedding present that produces great results at a heat setting of 4 out of 7.

Step 2: Deal with the yolks
Yolks go into a bowl with the flour, milk and baking powder.  Mix them thoroughly.  Once they are well combined, stir in the canola oil.

Step 3: Whip It
Whip the whites until stiff peaks form.

Step 4: Combine
Fold the whites into the batter.  Don't try to get everything 100% uniform, you'll just wind up breaking down the air bubbles you're trying to introduce into the mixture.  Just get the egg whites incorporated to the point where there aren't big white chunks of foam floating around, and then stop.  Optionally, if you wanted to add berries, or chocolate chips, or other garnishments, this is where to do it.

Step 5: Prep your waffle iron
Having the canola oil in your batter greatly reduces the chances of sticking.  Our waffle iron works great without any oiling, but if your particular model does best with a spray of Pam or olive oil, by all means, do so.

Step 6: Make Waffles - Part I
Load the batter into your waffle iron.  Generally speaking, you should only need to fill the iron halfway or so - otherwise you are courting the risk of overflow upon closing the top.  Not the end of the world if it happens, just an annoying mess...

Step 7: Make Waffles - Part II
Pay close attention to the steam blasting out of the sides of your waffle iron.  When the steam output has decreased to a few thin, wispy strands, then your waffles are done. 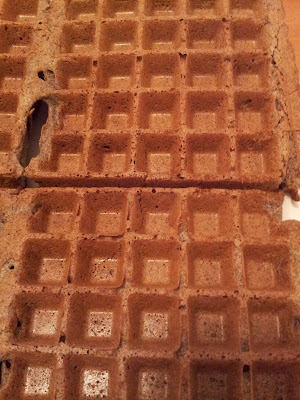 If your waffle iron does not emit any steam, then go plug it in and start this step again.

I am a bit of a waffle minimalist.  I don't like much besides maple syrup (and perhaps a piece of fried chicken) to touch my waffles.

Generally, my Canadian patriotism is going to have me leaning towards using syrup produced north of the 49th parallel.  But today, I'm going to name-check a great little Pennsylvania based maple syrup maker. 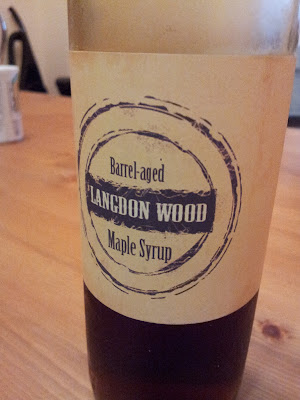 Langdon Wood makes a barrel-aged maple syrup that is aged in a used, rye whisky barrel to add an interesting little twist on the usual maple syrup experience.  It's incredibly delicious, and I highly recommend it!

If you prefer to trick out your waffles a little further, these waffles will hold up very well to whatever creams, fruits and compotes you may want to subject them to, so by all means, go crazy with it.  They're your waffles after all...

Texture and mouth feel are always challenges with gluten free recipes.  As with the pancake recipe, the beaten egg whites really help with the texture, and keep the waffles from being too heavy.  The canola oil also helps the waffles toast up nice and crispy on the outside, and prevent the interior from getting too dry and crumbly.  I know you might be tempted to try to make a low-fat waffle by omitting the oil, but I really wouldn't recommend it...
Posted by Unknown at 6:09 PM