About 3 and a half years ago, after a long, and arduous diagnostic process, Liz found out that she was gluten-intolerant / celiac / whatever other term you want.  After an initial process of "ZOMG!!! NO PIZZA!!! NO BEER!!! WTFBBQ!!!" we went about eliminating gluten from her lifestyle (which coincidentally meant eliminating gluten from many aspects of my lifestyle too).  It's kinda like how Samuel L Jackson puts it in Pulp Fiction:

But after doing some research, we found that being Gluten-Free wasn't nearly as onerous as we thought it might be.  There are certainly compromises that need to be made, but by and large, Liz has made the transition pretty well.

A big part of going gluten-free involves finding ways to keep your carby comfort foods in the rotation in a gluten-free form.  And when it comes to breakfast, that means Gluten-Free Pancakes! 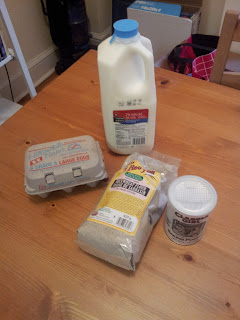 Buckwheat flour has no gluten in it, and has a great flavour to it.  It's classically used in a number of French crepe recipes (usually from Brittany), but the goal here is not for a thin, rolled-up crepe - We're going for a thick, fluffy pancake, something that can be difficult to achieve without a gluteny flour.

The Key to a thick, fluffy, gluten-free pancake, as it turns out, is something that I pulled from a Jamie Oliver episode many years ago: Separate your eggs, and whip the whites.  Here's the drill:

Step 2: Deal with the yolks
Yolks go into a bowl with the flour, milk and baking powder.  Mix them thoroughly.  You can add as much as another 1/4 cup of milk if your batter is thicker than you like it.  Any more than that, and you're getting into crepe batter territory

Step 3: Whip It
Whip the whites until stiff peaks form.  What the hell does "stiff peaks" mean?  Good question.  Here's a picture:

Step 4: Combine
Fold the whites into the batter.  Don't try to get everything 100% uniform, you'll just wind up breaking down the air bubbles you're trying to introduce into the mixture.  Just get the egg whites incorporated to the point where there aren't big white chunks of foam floating around, and then stop.


Step 5: Prep your pan
Put a skillet on medium or medium-low heat depending on how nuclear your stove is.  Melt a tablespoon or two of butter and WAIT for the butter to melt and get hot.  The #1 reason (Number ONE) for subpar pancakes at this stage is a pan that isn't hot enough.  Test your pan by making a miniature pancake, about the size of a quarter.  If you don't hear an immediate sizzle, then your pan is not hot enough.

Step 6: Make Pancakes - Part I
Spoon dollops of batter onto your pan.  If you've done it right, the batter should stand up a bit on its own, and you may need to shake your pan to get the pancakes to flatten out.

Step 6a: Garnishment
Optionally, if you wanted to add berries, or banana slices, or chocolate chips, this is where to do it.  Just press your chosen accoutrement into the top of each pancake as it's cooking.

Step 7: Make Pancakes - Part II
When you see bubbles come up to the top surface of the pancakes, it's almost time to flip.  When you see the bubbles around the edges pop and they don't close back over, it's time to flip your pancakes.  Again, if you got your egg whites nice and stiff, you may need to pat your pancakes down with a spatula to flatten them out properly.  They should only need a minute or two to get brown on the flipped side before they are ready. 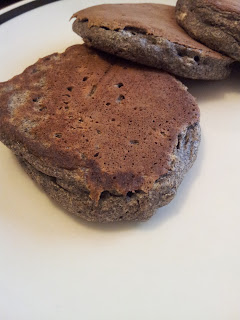 You'll note that the buckwheat flour yields a darker colour than conventional pancakes.  That is totally normal.  You may also have some contrasting bits of egg white on the interior of some of your pancakes.  That is also normal.  If you stirred the mixture enough to get the egg whites 100% uniformly distributed, you would lose a lot of the fluffiness.

Going with 100% buckwheat flour does result in some inherent differences with respect to taste and feel.  I have seen buckwheat flour described as tasting nutty, earthy, grassy... I don't think earthy is accurate (mushrooms are earthy - buckwheat not so much), but somewhere between nutty and grassy sounds about right.  I like it a lot, but it is distinct, and quite different in flavour than wheat flour pancakes.  The important thing is that it goes great with Maple Syrup! 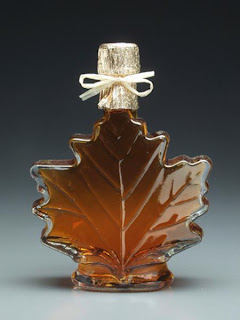 Texturally, buckwheat flour is pretty much always sold as a whole-grain flour.  That means it is high in fibre and very good for you.  It also means that it is going to be less luxurious from a mouth feel standpoint than refined wheat flour.

I'm sure that I can improve on this recipe by subbing in some chickpea, rice or tapioca flour to lend a little more smoothness to the mouth feel, but by and large, these pancakes are delicious as they are, and simple to prepare.  That egg white trick works great with regular pancakes too, btw.
Posted by Unknown at 9:49 PM