I've been slacking on keeping up with my Wire-watching thoughts and impressions, but suffice to say that Season One is in the books, and I am really looking forward to watching Season Two.

I can tell that one of the tactics that David Simon seems to enjoy is getting you to like a character, and then having bad things happen to that character.  He's a bit of a bastard that way, to be honest, although he at least gives you the courtesy of telegraphing it ahead of time so that you can prepare yourself.

Case in point - did any of you not see Wallace's death coming a mile away?  That was an upsetting one for me - I liked that kid...  You also had to know that the newly-promoted Stinkum was going to get it before long too.  No shocker there.

Kima getting shot though... that one surprised me.  That whole sequence where her undercover situation just keeps getting worse and worse (music's too loud to hear anything, street signs are spun around, no backup) is really well done, and yet, despite all signals to the contrary, I still found myself thinking "well, she's got a gun taped under the seat, she'll be ok... I mean there's no way that they would - OMG SHE GOT SHOT!!!"

All those years in which I wasn't watching The Wire, many of you kept telling me how awesome it was, but couldn't really articulate why.  After noting my own reactions to Wallace getting killed and Kima getting shot, I understand now.  These are all obviously fictional characters, and yet the show is so well assembled that they all feel astonishingly real. 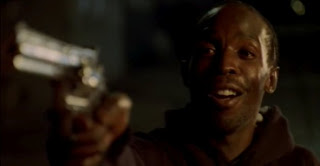