Adventures in Charcuterie - Episode 1: This is how sausage is made

Every culture in human history that has achieved any kind of success has figured out a way to make some variation on tubular meat.  Much like humanity's eternal need to get a buzz (a post for another time), the need for delicious, preservable, and portable meat preparations is universal.

Having grown up eating a variety of different European and Asian sausages, I was very excited to receive Michael Ruhlman's Charcuterie cookbook for Christmas. 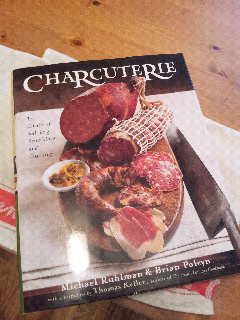 And so, after doing some reading and ordering some materials online, I set to work at making my first ever batch of sausage. 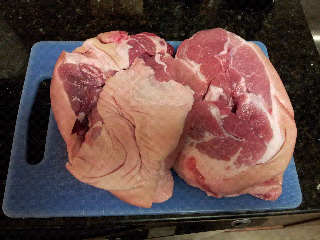 You don't want the pork skin in your sausage, so trim that off.  It should go without saying to make sure you use a very sharp knife, but I'm saying it anyways.  Dull knives are dangerous!

Dice the pork.  I went with about a 1-inch dice, and to be honest, I should have gone smaller, as the bigger pieces required more effort to get through the grinder.

Season the pork with the salt, pepper and garlic.  It's easiest to just use your hands to mix all the ingredients and get everything uniform.

SUPER IMPORTANT: Chill everything in the freezer for 30-60 minutes.  Also, put all the pieces of your grinder in the freezer too.  The grinding process will generate a fair bit of heat, and if your meat heats up too much, the fat will melt, thereby killing your sausage's texture.  Warmer temperatures are also more conducive to microbial growth, and bacteria growing in your sausage is bad.

Grind your meat through the coarse die, into a bowl set into ice (again, temperature control is tres important). 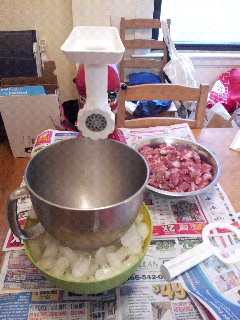 This is a visceral process, so be prepared for that if you've never done it before.  I used the grinder attachment for our KitchenAid Mixer, and it worked pretty well, although there was a fair bit of what sausage geeks call "smear" going on, which isn't ideal.

Nonetheless, I managed to get everything ground without too much hassle.  I did have to stop and clear the grinder once during the process, which was every bit as gross as you'd think it would be.

Add the cold wine to the ground meat and mix to combine.  I used the paddle attachment on our KitchenAid for about a minute or so.

Pull a sample (2 tbsp or so) of the sausage mixture and put the rest into the freezer to chill while you do some quality control. 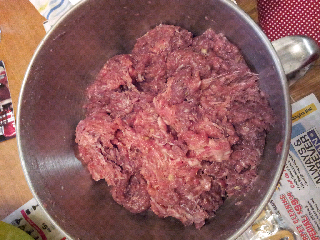 Saute your sample in a pan with a little bit of oil and taste it.

My sample tasted salty as all hell - you know, if hell were a salt flat that you were trying to eat.  In retrospect, I should have reduced the amount of salt to account for the amount of pork lost when I removed the skin at the start of the prep.  Ah well, not much to do about it at this point except press on to:

Not strictly necessary.  It's totally fine to shape the sausage into patties at this point and call it a day, but I wanted to try our sausage stuffer attachment too, so away we went.

I bought pretubed, natural hog casings from thesausagemaker.com and soaked them overnight to make sure they'd be ready to go.

As with grinding, I made sure to chill all the stuffer parts in the freezer prior to use.

The stuffing process takes some getting used to, and my inner 12-year old kept wanting to make terrible, and juvenile comments the whole time.  I had some difficulty gauging how full to stuff the casings, and wound up splitting the casing at one point when I overstuffed one section, and also wound up with a few sections that were woefully understuffed.  But after a little while, I sorta got the hang of it, and after twisting the stuffed coil into links, wound up with this: 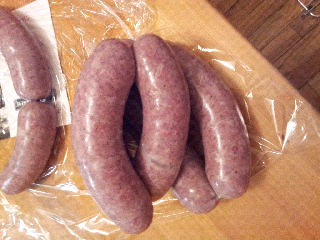 Not a bad-looking result for a first time, I figure.  Total yield was about 18 six-inch links.

As noted earlier, this first batch was a fair bit on the salty side.  In an attempt to off-set that in the cooking process the first time I went to cook some of these, I did two things:

1. I blanched the sausages for a couple of minutes in simmering water to draw out some of the excess salt.
2. I sauteed the blanched sausages together with onions, peppers and mushrooms that had not been seasoned with any salt, allowing the salt from the sausage to do the seasoning for me.

That approach worked pretty well, and Liz and I enjoyed a couple of dinners the following week using this formula.

Other things we're looking forward to trying with this sausage include pasta sauce, and cassoulet, which also seem like good applications that can off-set a salty sausage.

A Few Other Notes:

There is a lot of garlic in this sausage.  Make sure you have a fresh box of baking soda in your fridge and in your freezer so that you don't wind up flavouring your entire food supply with garlic.  Not that it's necessarily a bad thing in all cases, but chilling a beverage with garlic-infused ice cubes probably isn't what you're looking for...
Posted by Unknown at 5:04 PM