A Field Guide To The Public Skating Rink 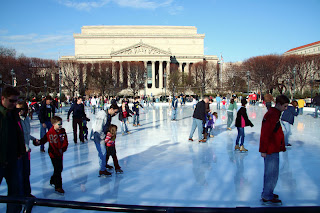 As a Canadian expat living in Washington DC, I've probably logged more rink time than most of the local population.  But the vast majority of that rink time has been spent indoors, even during my Canadian residency, which included a pretty long stint in Vancouver which is totally unsuitable for outdoor ice.

So every year, when the National Gallery of Art's Sculpture Garden rink gets going, I try to get out there as much as I feel like I'm willing to drop the $8 for admission.  Skating outdoors rules.  No matter how unseasonably warm it might be (it's been around 20C through most of Advent), skating outside is a surefire way to kick your brain into winter-festivities mode.

The Sculpture Garden rink is small, and crowded, which can impede your ability to get a really good skate in, but it sure does make for great people watching.  And for the benefit of those of you who don't often get out on the rink, here is a handy guide to the denizens of the public rink - some of which might even apply to you: 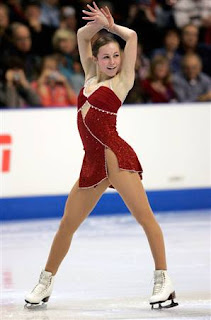 Rule #1 of the public skating rink: The Figure Skaters own the center.  If you don't know a Triple Lutz from a Triple Salchow, you'd best stay to the outside and skate NASCAR laps with the rest of the Plebians.  The Figure Skating category resolves down into several sub-categories:

1a. The Public Rink Diva
Easily identified by the tight-fitting gear, the ability to land a jump on a single edge, and impressive looking spins with enough arm flourishes to make you look around for the French judge's score for artistic impression, The Diva is there to make you look at her (and while there are dude figure skaters out there, The Diva is always female... always).  She is, however, only there to be looked at.  Don't try to approach her, Icarus, lest her brilliance melt the wax on your wings.

1b. The Grinder
An aspiring Diva, The Grinder is there to practice the very moves that The Diva executes blindfolded and in-time to arrhythmic crowd-clapping.  Only problem is that The Grinder fails a lot, and spends a lot of her time on her @$$, collecting the snow carved up by the Diva's latest spin.  Hence her alternate name: The Zamboni 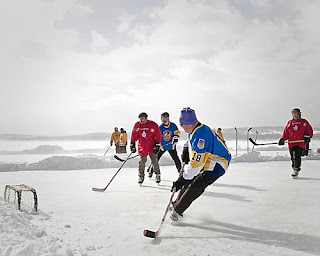 Check the skates.  Not just for the fact that they're hockey skates - check for the telltale signs of hockey-wear-and-tear: black puck-marks on the blade holders, cuts and scuffs on the boots from fighting in the corners with opposing players, visible signs of mold or mildew on the laces...  You may also see some team swag - a logo'd ball cap, or a warmup jacket.

If the center of the rink can be thought of as dominated by the Figure Skaters, the outside of the rink can be considered to be loosely patrolled by the Hockey Players.  They tend to play the role of impromptu instructor for Terrified Amateurs, and are often first on the scene when a Fearless Amateur takes a bad spill.  They also tend to be well represented in the "Couples on a Date" category. 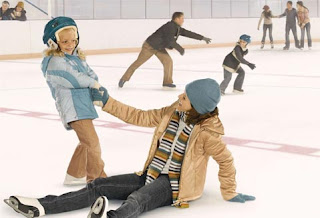 Rental skates?  Stiff, upright posture?  Total lack of control?  Check, check, aaaannnddd.... check.  The Amateurs present a lot of the people-watching fun at the public skating rink.  Their enthusiasm, effort level, and general lack of self-consciousness is awesome from a spectator standpoint.  There are of course, a few different sub-species here:

3a. The Terrified Amateur
Distinguished by the death grip they maintain along the sideboards, the Terrified Amateur believes that if God meant for them to skate, He would have given them pointier feet.  Nevertheless, the Terrified Amateur is a gamer, having been dragged to the rink by friends, family, or the hope of getting somewhere with their date.  Fortunately, the Terrified Amateur knows their limits, and their hanging-on-to-the-boards-for-dear-life strategy usually keeps them from injuring themselves.  They are also easily picked-out by Hockey Players as candidates for an impromptu skating lesson if they look cute enough.

3b. The Fearless Amateur
The most dangerous animal on the public rink, the Fearless Amateur is like the proverbial Bull in a China Shop, only if that China Shop had a frozen sheet of ice for a floor, and the Bull had sharp, steel blades strapped to its feet.  The Fearless Amateur has generally acquired some ability to skate forward, but despite a lack of turning or stopping capability, will gleefully cannonball around the rink as fast as they can until they hit something.  Best case scenario: They slam into the boards.  Worst case scenario: They take out an entire family of Kosovan refugees. 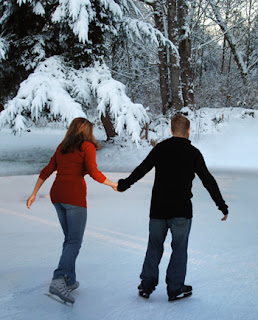 The skating date makes for great people-watching.  The rink acts like a de facto fishbowl, as the couple literally skates into and out of close proximity of everyone else at the rink on a recurring basis.  It's like having a date in a restaurant, only if your table slid around the restaurant on a conveyor so all of the other patrons could take turns listening in on what your favourite movie is, and where you would like to travel to.  Depending on the relative skating ability, there are three (technically four) different variations of Couple On A Date at the public rink:

4a. Both parties know how to skate
Probably the closest to a regular date, as the public rink is just treated like any other venue: a park, or a seashore for instance.  For the two people on the date, this scenario allows them to connect via a shared interest and skill (skating) that really is a bit of a niche thing in the DC area.  It's actually quite sweet, and gives the rest of the rink goers a bit of a d'awwww moment to brighten their day.

4b. Dude knows how to skate. Girl is a total amateur
This is actually a pretty good situation for the dude.  If his date is a Terrified Amateur, she will be clinging onto him for dear life the entire time, and he will be able to prove his value as a man by protecting her from an imminent, ice-related demise.  If his date is a Fearless Amateur, then it is a virtual guarantee that she will wipe out hard at some point, and he will have an opportunity to prove his value as a man by picking her up, dusting her off, and giving her some hands-on coaching on how to improve her skating (the level of hands-on can vary depending on the dude's douchebag factor...).  All guys should learn how to skate, if only to open up this scenario for them as a future possibility.

4c. Girl knows how to skate. Dude has no clue
Emasculation central.  And also, the most entertaining for spectators.  Pride kicks in hard here, so the dude has no choice but to be a Fearless Amateur, and the flailing, stumbling, keystone cops routine that ensues is hilarious, both to his date, and to everyone else at the rink.  It's made even better when the girl starts to show him up by trying to pick him up off the ice, or letting him use her as a pylon for balance as he waddles around the rink.  Ultimately, the dude may send her away, swallow his pride, and go into Terrified Amateur mode along the boards.  That just opens him up to have his date skate up to him at speed only to snow him with a power stop (also hilarious).  All guys should learn how to skate, if only to prevent them from ever appearing in this scenario. 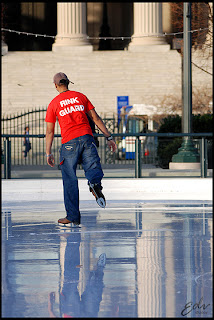 Ostensibly there to enforce the rules, the actual role of the Rink Guards is for them simply to exist, so that the rink ownership has a means for avoiding legal action stemming from the injuries caused by Fearless Amateurs.  I don't think I've ever actually seen Rink Guards do anything particularly useful, but that might just be me. 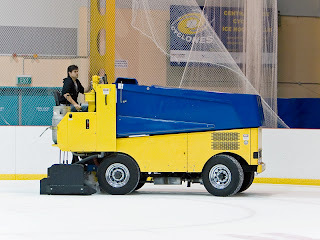 Everyone wishes they could be this guy...
Posted by Unknown at 10:52 PM