I'm pretty sure it was Liz who first introduced me to Moroccan food.  I can't remember exactly when or where, but I'm pretty certain it was somewhere in Vancouver, sometime in the late '90s.  It was a real gamechanger for me, food-wise.

Up until that time, I had eaten pretty much every variety of Asian, and most varieties of European cuisines, but aside from a handful of South African dishes that my mom would make, I had never tried any sort of African cuisine before.  Moroccan food, with it's aromatic spice blends, slow-cooked tagines, and novel-looking starches was a gateway to a whole new, and delicious, world for me.

So naturally, I eventually wanted to try cooking it myself, discovering in the process, that Moroccan food can be a real pain in the @$$ to make.

Why, you ask?  Because procurement of all the different spices and condiments can be a serious impediment.  Some of them, such as mace and saffron, are not so much hard to come by as they are annoyingly expensive.  But others, such as, say, ras el hanout, are pretty much impossible to find, leaving you to instead procure 20 separate individual spices in order to blend your own.

Which brings us to preserved lemons.  Preserved lemons, so key to so many amazing Moroccan dishes, is both difficult to find, and annoyingly expensive when found.  Fortunately, it is incredibly easy to make your own. 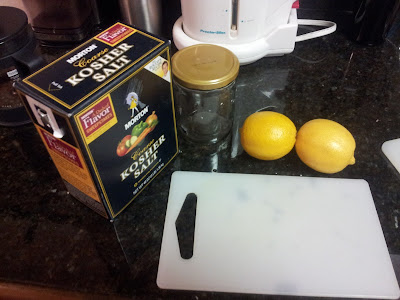 A clean jar, with a lid
Enough lemons to be able to fill the jar with lemon halves (and maybe a few extra if you like)
Kosher salt (lots)

Ready to preserve some lemons?  Here we go:
Three weeks later, you will have beautiful preserved lemons. 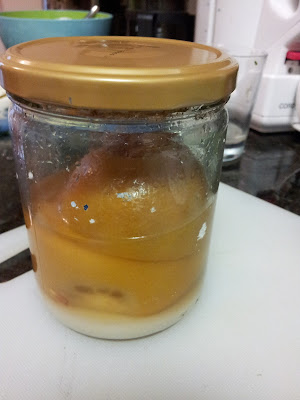 What's that you say?  You don't know any Moroccan food recipes?  OK, I'll post a couple up in the near future, but in the meantime: